Nowadays, the evolution of the biosphere under the influence of human activities is progressing very rapidly. As a result of human misuse of natural processes, environmental problems became very serious in the middle of the twentieth century. An ecological problem is a reflection of the impact of nature on man in relation to the impact of man on nature, that is, the processes that have an economic significance in his economy, in life, in relation to natural phenomena. what phenomenon is understood. (climate change, mass migration of animals) As a result of the imbalance in nature, various environmental problems are emerging. 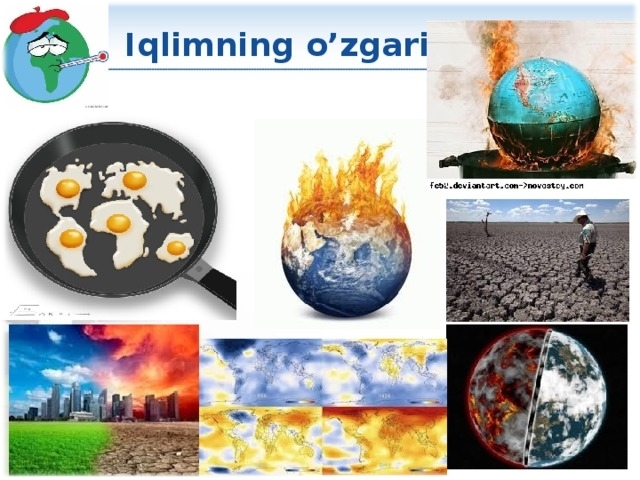 They can be divided into the following groups.

Global environmental problems are the result of natural, natural anthropogenic and pure anthropogenic impacts observed around the world and belong to humanity.

Here are some of these environmental issues:

Atmospheric suffocation. In recent years, it has become clear that the amount of SO2 in the atmosphere is increasing.

As a result, the Earth's surface temperature has dropped by 0.5% in the last 100 years.

Increased by 1.0 degrees. Large-scale climate change is associated with industrial emissions and exhaust fumes from the atmosphere. due to SO2 gas accumulating in the atmosphere. If the situation does not change, the surface temperature may rise to 1.5-4.5 degrees in the middle of the XXI century. As a result:

1. Climate change, especially the intensification of the desertification process. Precipitation changes. Rising sea and ocean levels are followed by melting and shrinking glaciers, as well as other phenomena. 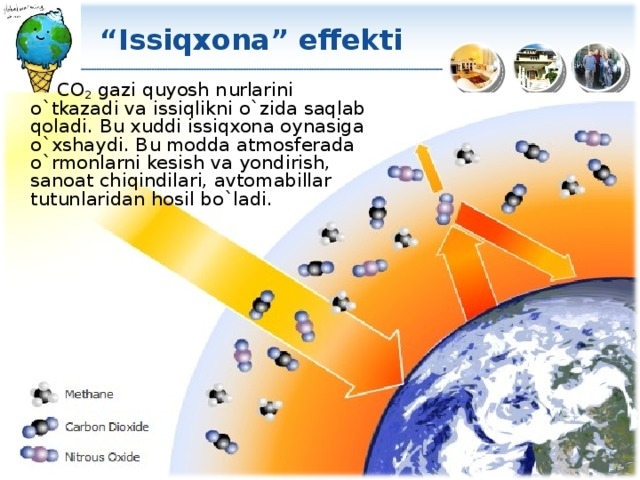 Urgench State University has adopted a university plan called Environmental Education for Sustainable Future in 2018, which focuses on education for sustainability. A number of initiatives and bodies have been launched to implement this plan, including the Urgench State University Sustainable Schools Initiative and the Department of Environment and Sustainability Research. This will serve as a great foundation on the way to achieving the SDG goals started in 2016. This strategy set the goal of implementing sustainability management through an integrated approach that engages society through education and. The university’s national plan highlights global warming, carbon dioxide emissions and a lack of a green economy as one of a number of environmental issues related to climate change. To find alternative solutions to these problems, the university has developed climate change programs and conducted training seminars. The National Action Plan for Education for Sustainability includes a new plan on climate change and its impact on other natural resources on a global scale. Urgench State University constantly develops its goals on alleviating the serious impacts of climate change.